Mâori in the Great War: 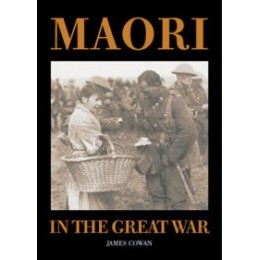 Maori form a significant proportion of the modern New Zealand Army, and Maori officers have achieved the very highest commands, Their unique culture is deeply embedded in its tradition and daily routines; celebrated by Maori (indigenous) and pakeha (non-indigenous) soldiers alike.

The exploits of the 28th (Maori) Battalion in WWll - peerless in attack - are well-remembered. Not so well known is the major Maori contribution to the Allied cause in the Great War.
Maori were quick to respond in 1914. Over five times as many as the specified contingent of 500 men volunteered, and that number of places was allocated on a tribal basis.

As the centennial of the start of WWl approaches, it is timely to revise and republish Cowans 1926 work.
In 1914 the population of New Zealand was little more than one million, of whom 50,000 were Maori. Eventually 2227 Maori men served overseas, the vast majority volunteers. 336 paid the supreme sacrifice, of whom 196 were killed in action or died of wounds. A further 734 were wounded, an over-all casualty rate approaching 50%.

This revised;Maori in the Great War; contains appendices specifying full details of every soldier who served (a boon for present-day genealogists) as well as the Roll of Honour.

Initially sent on garrison duty to Malta, the First Maori Contingent protested at this static role. Their protests heeded, they were re-deployed to Gallipoli on 3 July 1915. Their field engineering skills were put to good use in the development of the Big Sap principal communication trench. In August they participated in the Battle of Sari Bair and at Hill 60.

When the New Zealand Division was formed in Egypt in March 1916 a Pioneer Battalion was raised with two Maori, and two pakeha platoons in each of four companies. This 50/50 ratio remained in the establishment on the Western Front until early February 1918 when the Pioneer Battalion was disbanded, and the unit, now solely Maori, became the New Zealand Maori (Pioneer) Battalion.

The Battalion served with great credit as part of the Division throughout its full itinerary, from May 1916 to The Armistice. From First Somme 1916 (notable for their Turk Lane major sap) then Messines, and Passchendaele (1917) and in March 1918 the great encounter battle on the Ancre which halted the German advance short of Amiens. From August to November 1918, the Pioneers worthily fulfilled their role in the last hundred days of the war, known as the Advance to Victory.