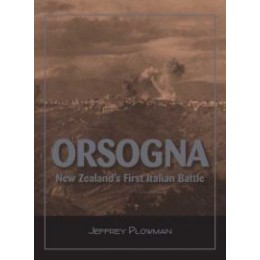 Today Orsogna is a modest town of 5,000 people in the province of Chieti in the Abruzzo region of southern Italy but, in 1943, it had a population of 7,000. It was not without good reason that the Germans chose to build this portion of the Bernhardt Line here. North of Termoli, the plains that start in the heel of the peninsula, near Brindisi, give way to a series of spurs and re-entrants running off eastward from the Apennines to the Adriatic. While drier and sunnier than the western side of the main divide, the eastern slopes tend to be steeper and more eroded. In addition, the rivers that drain this central divide are subject to sudden and unexpected flooding.

Thus, it is ideal country for the defender, its series of rivers and ridges can be defended one by one.
It was to this region of Italy that a rejuvenated New Zealand division arrived in November 1943. The furlough scheme that the government had initiated had been intended to give its front line soldiers a rest from the fray, but it backfired. Many did not want to return, especially after seeing what they termed “bludgers” avoiding the war in their so-called “safe” jobs. After interning some soldiers, the government was forced to back down and instead released personnel in defensive roles in New Zealand for service overseas. So by the time the division got to Italy there were few of the “old digs” left who had seen service in mainland Europe, let alone in the desert. For many New Zealanders of the Division this was their first taste of a European war. At least now the Division had its own armour. Not a British armoured brigade tacked on to provide support, but tanks crewed by New Zealanders, some of them former infantrymen, such as those from the 19 Battalion, who knew what it was like to go into action without tank support, and wanted to make a difference.