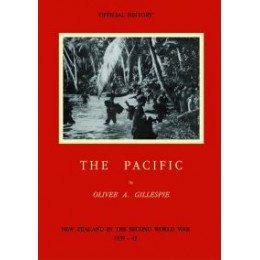 0 reviews  |  Write a review
Description Specification Reviews (0)
This volume is part of the Official History of New Zealand in the Second World War 1939-1945 and was originally published in 1952 by the Government of New Zealand, through the War History Branch of the Department of Internal Affairs. The Pacific is a tribute to the men who fought in a campaign which was singularly lacking in spectacle and heroics, but nevertheless required a high level of courage due to the challenging fighting conditions and strong powers of endurance to withstand a climate as exhausting by day as it was by night.
Although comparatively close at hand the islands of the Pacific, particularly those on which the actual fighting took place, were much less familiar than the historic and more romantic regions of the Old World, and the war on those islands was never fought in terms of European violence and ingenuity. But, whatever the circumstances, the death of young men is just as distressing whether it occurs in the jungle or the desert or in a cypress-studded landscape.