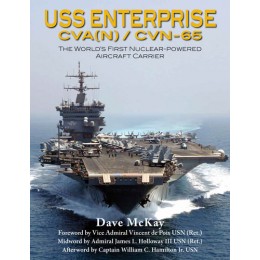 This book comprehensively describes the spirit, structure, function, and roles of Enterprise and of her sailors and airmen, those special men and women who sparked life into the cold iron. Big E sailed the seven seas for over half a century, completing 25 major deployments and serving in every US fleet. She represented the United States in almost every major naval operation from 1961, starting with the Cuban missile crisis and ending with Operation Enduring Freedom. She was first on station in the Arabian Sea following the September 11 attack on the United States in 2001. Big E sailed through five decades of major world geo-political and societal changes and technological growth, participating in the Cold War, Vietnam, and lastly the war on terror, and ushering in the integration of women into navy crew, and computers and satellite communications into daily routine. She led the way of a new navy, even towards the end of her service life, always demonstrating incredible adaptability.

With a focus on the design, construction, and early technologies that made Big E unique, this book also highlights the personalities behind the ship, including the enigmatic father of the nuclear navy, Adm. Hyman G. Rickover, and the skippers who, under his close eye, were entrusted to operate the most complex nuclear plant in existence. Full disclosure of the layout of Enterprise, the organization of the crew, the complexity of electronic combat systems, the air wings she hosted, and the manner in which she operated is discussed in an evolutionary sense. Enterprise in 2012 was a very different platform to when she was first operational in the early 1960s. Every deployment is described in detail, with many narratives inter-woven, and over 400 photographs illustrate the ship's proud history. There is a comprehensive summary and tabling of each deployment, air wing attachment, combat system architecture, maintenance overhaul period, and of significant mishaps and losses. Every detail of this magnificent ship has been covered, creating a deserving memorial to Big E, and to those who served on her.