Categories
Home » Other Titles » Those in Peril - A Blue Funnel Story

Those in Peril - A Blue Funnel Story 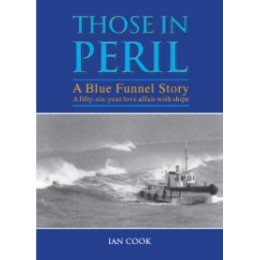 This story covers fifty six years of maritime history, from the last six months of the second world war until the year 2002. In December 1944, a young Scot began a seagoing career with one of Britain’s oldest shipping companies, Alfred Holt &. Company, the Blue Funnel Line of Liverpool, which took him around the globe to many remote places. From the Molucca Islands in Indonesia; to Matadi, one hundred miles up the Congo in Africa; to the creeks and thousand islands of Burma and Thailand; to New York, Sydney, Tokyo, Hamburg; Broome in West Australia; Jeddah in Saudi Arabia; to Shanghai, Yokohama and to little known parts of North Borneo; around the Pacific Islands and finally to New Zealand.

After fourteen years at sea, he began a new career as a marine pilot, which lasted for forty two years, piloting ships in Penang Malaysia, three New Zealand harbours and in Jeddah, Saudi Arabia. Fifty six years after boarding his first ship, Ian retired from the position of Harbour Master/Pilot in the port of Gisborne, Poverty Bay; where his namesake Captain James Cook first set foot on New Zealand soil.

During this long and varied career, Ian experienced North Atlantic convoys in wartime, a hurricane off the coast of Florida, survived three hours in shark infested waters in Lagos, Nigeria, witnessed a murder in the Celebes and tracked  a tiger in Malaysia . He played golf in unusual circumstances, with the sound of machineguns and mortar fire coming from an attack by Karen rebels in Moulmein, Burma, and in Labuan, North Borneo, found himself in the middle of an American ‘invasion’.