At the  2011 Australian Chief of Army History Conference: in Canberra on 30 September 2011

Following is an  extract from his speech:

The prologue and early chapters set out the background to the conflict and the context and pretext of Australian involvement (1860-1863).  It traces the early response to the urgent military need and the force build up period.
What emerges is a fascinating insight into two young nations eager to prove themselves to the empire and demonstrate ability and influence.  Very similar to fervor generated with the call to arms of the Boer War and WWI.
The middle part of the book details the military skirmishes and core campaigns in which the Australians participated from their main body arrival in NZ (1863-1864).  In general these include, but are not limited to, the relief of New Plymouth, the defence of Sth Auckland, and the Waikato, East Coast and Taranaki campaigns. 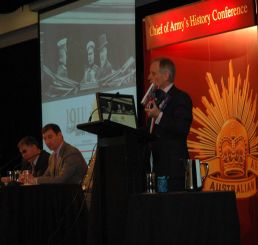 In addition to direct military action the author paints a picture of the other duties the Australians had to bear which are not too dissimilar from forces today.  The boredom of garrison duty, the difficulties of constabulary functions, the frustration of not being able to deliver a decisive defeat, and the constant problems of logistic supply and poor weather are clearly laid out.

The nature of these duties was no doubt directly attributed to the support role the Australian Regts played to the British Army.  They would advance in support and then occupy land vacated by the Maori in a relatively static defensive role against a cunning guerilla force.
The latter sections deal with the final major military engagements (1865-1866) that the Australians were involved in leading up until their disbandment and transition from soldier to settler.

The disbandment process was driven primarily by economics of the time.  Authorities were urged to take soldiers and their families off pay and put them on the land as soon as possible due to the difficult position of the Colonial Govt finances.  This was despite Maori resistance still in existence throughout the north island and the withdrawal of half of the Imperial Regts at the same time.

This process created disillusionment, anger and hardship as much of the land was not fit for settlement due to inadequate infrastructure.  This process also accelerated the confiscation of Maori land for settlement, a situation further compounded by the abolishment of the Native Land Purchase Department in 1865.

The official disbandment of the Military Settler Regts in Oct 1867 cut the financial, logistic and moral responsibility for these troops away from the Colonial Govt.  In a depressed society at the time most could not survive on the land.  A large number of volunteers returned to Australia.  Of the estimated 400 who remained, many joined the Armed Constabulary or sought work in the goldfields.

The book is a well laid out easy read.  It covers an area that has not researched extensively in the past and therefore adds to the study of the NZ Wars and Australian military history in general.
The Australian participation is largely overshadowed by post Federation military endeavour but the foundation of a federated force under Imperial command was first laid during the NZ Wars. 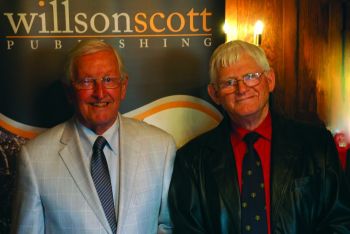 NZ too can attribute it earliest formed units to volunteer territorial colonial units in service during the NZ Wars.  The most noticeable being that of the Alexandra Troop of the Wanganui cavalry volunteers who were accepted for service 147 years ago (16 Sep 1864).  This was the founding unit of Queen Alexandra's Mounted Rifles whose 26 battle honours include the NZ Wars.
What also cannot escape notice is the growing tide of Australian nationalism as a result of the war clearly demonstrated by the tone of extensive media reporting in Australia at the time.

The bonds of the ANZAC spirit are also evident as the NZ and Australian colonies joined forces in support of a common ideal. This was reflected, as always, at the soldier level on the battlefield away from policy rhetoric long after the patriotic fervour had subsided.

If the ANZAC legend and spirit of nationalism was forged at Gallipoli then it could be said that the seeds were sown on the battlefields of Australia's' nearest neighbour.